COVID-19 Impact on Global SMB and Midmarket IT Spend

The Covid-19 threat to the global economy and to the IT industry is potentially as bad as, or worse than, the health impact. A global workforce that cannot collaborate effectively cannot deliver products that rely on timely supply of components from far-flung suppliers, and cannot create and implement complex solutions. The necessary isolation used to contain Covid-19 has a devastating effect on economic activity. Manufacturing does not work when people don’t. Chinese exports fell by 17.2% in January/February of this year. The impact on solutions is harder to quantify, but may well be even greater. However, with the slowing number of new cases in China, 80% of manufacturing plants have restarted with about 60% capacity which may restore supply-chain balance by addressing supply-side constraints. The freight (including trucking) and air-cargo routes between China and Asia is returning to normal but China-Europe and China-US routes may be impacted until the middle-to-end of Q2.

Globally SMBs IT spend in 2019 was $662B with a projected spend of US$700B in 2020, a growth rate of 5.6%. It is natural, in the current economic situation to pare down these spends and slice expectations (perhaps deeply) based on beginning-of-the-year projections. As compared to the original SMB IT spend growth rate, the projected growth rates may drop from a low of 29% to a high of 84% depending upon Techaisle’s optimistic to gloomy scenarios, resulting in revised growth rate ranges from 4.0% to 0.9%.

SMBs are a good indicator to measure the pulse of economy in any country as they constitute over 90 percent of global businesses. They are intricately linked to large businesses, government departments and educational institutions as both suppliers and customers. A large percentage of consumers rely on SMBs for products and services that they consume within their households. Technology plays an important part in daily operations of SMBs across all departmental functions including sales, marketing, operations, finance and customer support. SMBs form the essential thread of the economic fabric of any country and to a great extent their fortunes and investment capabilities are dependent on the economic situations and policies of the countries where they operate. In a downturn and uncertainty the investment capacity of SMBs is deeply affected. Techaisle conducted a global survey of SMBs to assess their investment intent which combined with Techaisle global SMB IT spend data presents four scenarios - Ideal, Optimistic, Pessimistic, Gloomy.

Primary research was conducted among senior IT and business decision makers from Techaisle network of 1.2M B2B IT professionals spread across 30+ countries.

There are some interesting differences in IT priorities as compared to 2018. IoT and VR/AR fell below top 10 (but still within top 15) and replaced by Voice/Digital assistants as well as Open source solutions. Across all regions (US, Europe, Asia/Pacific, Latin America) digital unified workspace and software-defined are becoming a priority for both SMBs and midmarket firms. Security many places within the top 10 IT challenges in different forms – cloud security, mobile device security, data protection/recovery/business continuity – with Cloud security as the top IT challenge.

Global SMB & Midmarket IT spend (excluding telecom services) in 2019 is projected to be US$665B and corresponding cloud spend is expected to be US$115B. Research also found that IT budget growths in 2019 will be the highest in Asia/Pacific (6.2%) and lowest in Latin America (1.8%). While IT budget constraint is not the top challenge within SMBs in the US and Asia/Pacific, it is the top concern in Latin America.

Managing data growth is continuing to pose challenge for SMBs and when probed further Techaisle research found that only 11% of SMBs and 29% of midmarket firms have evidence-driven culture with data-driven decision-making business processes in which data defines requirements or opportunities and management then determines the best option for moving forward. In the US, 17% of small business and 34% of midmarket firms consider themselves to be innovative. 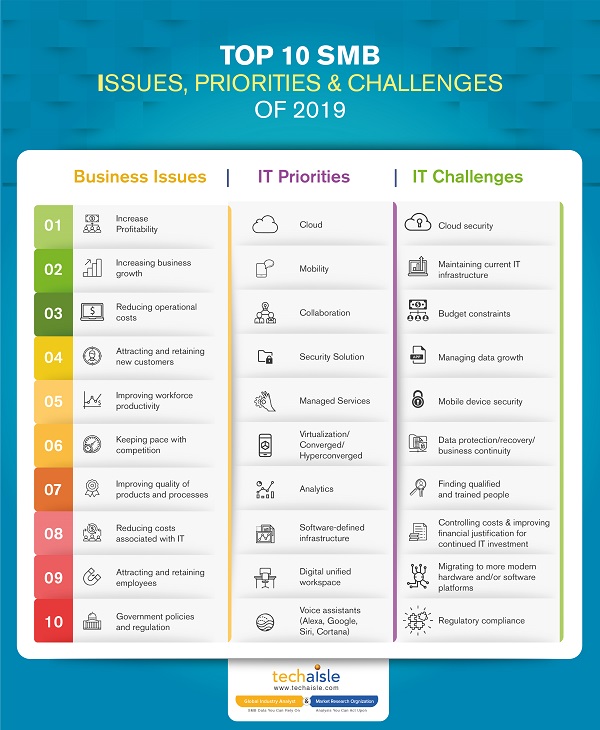 Techaisle’s latest report is designed to help SMB buyers and suppliers identify IT stack requirements, and to compare the offerings and ecosystems of the two current market leaders, Dell and HPE, against Techaisle’s definition of essential SMB & midmarket business technologies. The report is structured in three parts: 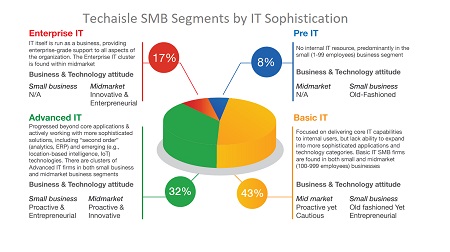