The State of SMB Cloud Channel – an inflection point is reached

The US SMB IT channel partner has reached an inflection point. Faced with an expanded SMB buyer community and requirements for specialized skills to support different solutions, the SMB channel partner is beginning to segment by focus area. Although different specialties are starting from a common point today, Techaisle expects to see each develop unique characteristics over the next several years.

Highlights from Techaisle’s The State of US SMB Cloud Channel report include:

The business of the SMB channel: migrating to specializations including (and/or based on) cloud

The SMB buy-side/business perspective: a tale of opportunity and limitations

Each of the topics is covered in depth in the report. What emerges is a portrait of a market that offers tremendous opportunity for SMB channel partners that are able to build and invest in a cloud strategy, but one that is marked by tremendous challenges for channel organizations that lack the will or capacity to adjust to a changing SMB business environment.

Similar state of SMB channel reports are being analyzed for mobility, managed services and virtualization.

What is driving global SMB VDI and DaaS adoption?

Results from the Techaisle SMB 2015 Virtualization surveys in the US, EMEA, Asia/Pacific and Latin America indicates that client virtualization has not been as widely adopted by SMBs as server virtualization. VDI is quite a lot less common than server virtualization, and DaaS adoption is still in its early stages. Techaisle believes that most midmarket firms that have invested in VDI and especially DaaS are still experimenting with the technology, and that most small businesses are still several years away from even this level of preliminary adoption.

Techaisle is able to draw on its multiple large-scale global SMB surveys to illustrate changes in SMB VDI/DaaS adoption drivers, and is able to add context from its SMB channel research to illustrate similarities and differences in perspective between SMB buyers and their primary IT advisor/supplier community.

Comparing 2015 and 2013 reasons for using VDI/DaaS
The key theme in the 2015 responses is “control”: SMBs are looking for more effective backup and disaster recovery, for more security, for means of assuring regulatory compliance, and for a platform that supports scalability and flexibility. With the exception of “reduce operating cost,” 2015 respondents are not particularly focused on cost issues, or on support for mobile apps.

The 2013 findings reflected a different set of SMB user needs. Two years ago, apps were paramount, with providing “access to applications from anywhere on any device”, “improving the availability of applications” and “deliver services on demand” the first, second and fourth highest-ranked responses. In 2015 these factors rank seventh, ninth and tenth on the list.

It seems clear that while an earlier generation of SMB VDI/DaaS adopters was looking for a means of delivering apps to users, today’s SMBs are looking to VDI/DaaS as a means of increasing control over mobile assets. This may be in part a reaction to generally-greater access to capable mobile apps, but it may – and in Techaisle’s opinion, does – reflect much greater awareness and concern over corporate data security concerns arising from widespread use of mobility.

SMB and Channel Disconnects
If we compare 2015 SMB buy-side and SMB channel responses, we see that the channel has not moved from “app” to “control” as fully as the SMB user community. SMB buyers prize control options – backup and DR, security, and compliance – and also acknowledge the importance of OPEX reductions and scalability. The channel believes that SMB clients primarily value scalability and flexibility, and also understand the need for control over regulatory and backup/DR, but are still focused on app delivery issues – “deliver services on demand” and “anywhere/any device app access” – that have fallen in the buy-side priority queue.

Targeting by IT Sophistication Segmentation
Techaisle’s IT sophistication-based segmentation finds that there are pockets within the global SMB market that are progressing faster than their employee size group peers. Advanced IT small businesses are five times as likely to be using VDI today as Pre-IT organizations. While DaaS is less well established, roughly a third of the small business Advanced IT group is using or planning to begin use of DaaS as well.

Within midmarket businesses VDI penetration does not vary much by sophistication segment, indicating that it has reached a relatively common level of use. DaaS, on the other hand, is still wending its way through midmarket users: 10% of Basic IT firms, 20% of Advanced IT firms and 31% of Enterprise IT firms have at least initial trials underway. DaaS messaging should therefore be targeted primarily at the more sophisticated SMB user communities.

Techaisle’s recently completely study US SMB Mobility Solutions Adoption Trends shows that SMBs are more optimistic than they ought to be about their current mobility security profiles, but even so, less than 20% of US SMBs believe that they are “fully prepared” today. Like manageability, security is an important constraint on mobility adoption within the SMB market. Suppliers need to help SMB clients to establish frameworks that protect against both external and employee threats to information security.

In many ways, it is difficult or impossible to isolate security as an issue in mobility. Security is intrinsic to the devices, applications and solutions used by SMB firms that have adopted mobility, and security is an essential factor in supporting the mobile workforce. Techaisle wants to highlight two findings from the US SMB 2015 mobility survey that are specific to security, and which are important to understanding and supporting the SMB mobility market. 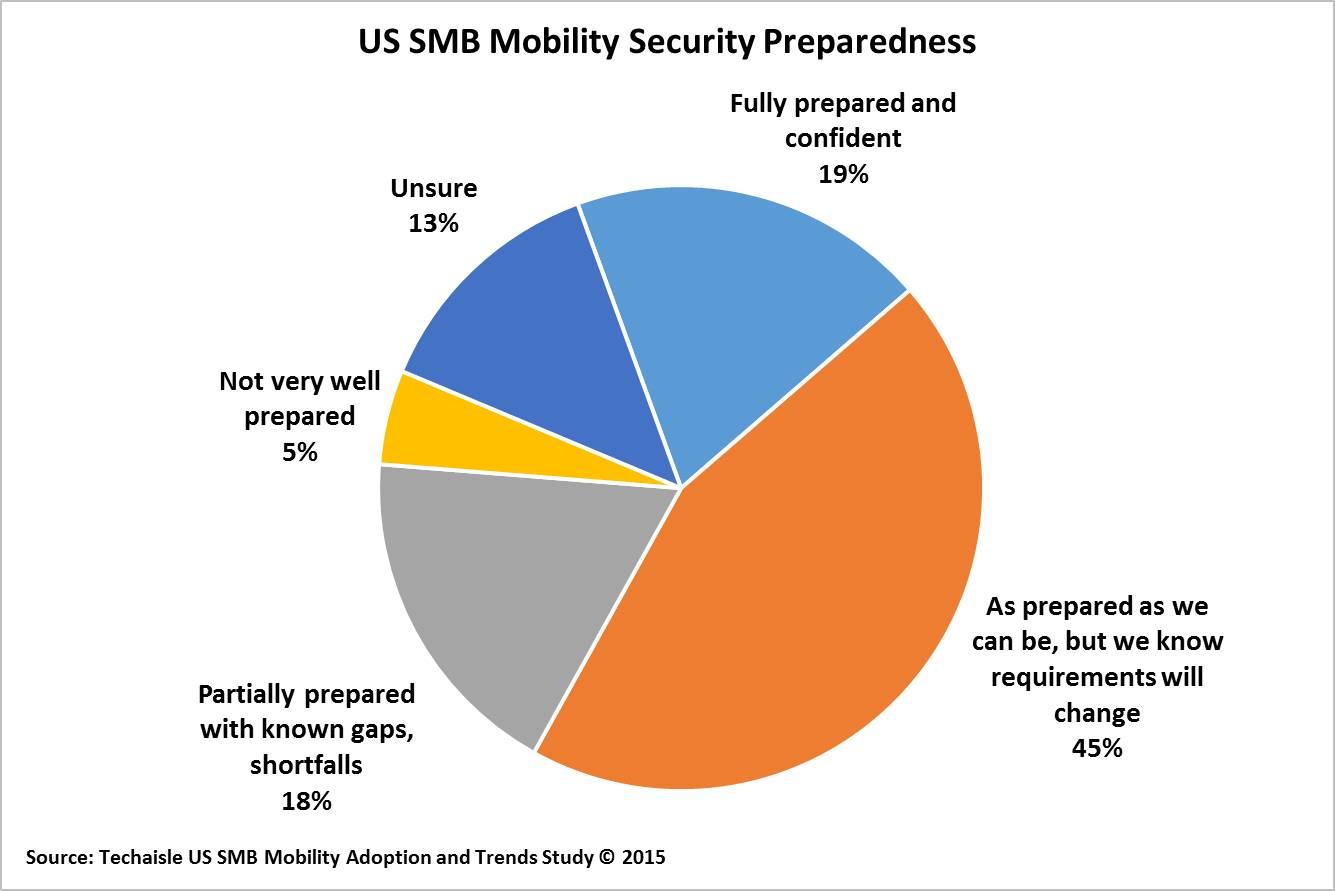 Current mobility security posture within SMBs
The first of these data points concerns the current mobility security posture within US SMBs. As the data shows, SMBs are cognizant of the challenges associated with securing mobility-dependent workspaces and work patterns. Fully 45% believe that they are “as prepared as we can be,” but acknowledge that “requirements will change.” Nearly 20% state that they are “partially prepared” but have “known gaps and shortfalls,” and other 5% confess to being “not very well prepared.” In reality, it is likely that “partially prepared” describes a much greater swath of the SMB market than these figures suggest: requirements do indeed change continuously, and even firms that are confident that they are “fully prepared” (19%) may find that the threat landscape is more extensive and pernicious than they had imagined. Techaisle is aware that it is hard for suppliers to persuade potential customers that they “ought to want to” be more proactive with security – but with increasing frequency and severity of breaches and attacks, and the exposure that mobility’s flexible perimeter incurs, it is important for suppliers to position their solutions against the reality of the threat landscape rather than the SMB perception of exposure and preparedness.

SMB perception of mobile threat sources: the enemy is inside the tent
Second data point has to do with mobile threat sources. Techaisle survey data shows that the enemy is inside the tent. During the course of the Techaisle SMB 2015 survey, respondents were asked “When it comes to security risk in the mobile computing context, which of the following represents a source of exposure or uncertainty within your organization?” To a (surprisingly) high degree, SMB concerns with mobility security revolve around users. SMB IT respondents ranked three user-attributable issues – user neglect/irresponsibility, lack of user knowledge and awareness, and user mishap/thoughtlessness – amongst their top four concerns, trailing only “general malware infection” as a mobility security threat.

As is the case in each year’s research, the 2015 Techaisle SMB Mobility Adoption Trends survey asked respondents to detail their plans for acquisition of different types of client devices. Two of the major categories investigated by the survey were desktop PCs and notebook PCs. Here, as was the case last year, Techaisle finds stronger purchase intentions for desktops than for notebooks: 30% of US small businesses and 75% of US midmarket companies are planning to buy desktops in 2015, as compared with 18% of small businesses and 63% of midmarket firms reporting notebook purchase intentions. Projected volumes of purchases are also generally higher for desktops than for notebooks.

However, corporate purchase intentions do not provide a complete perspective on mobile device acquisitions. While one can assume that all desktops connected within a business are company-owned, both data and experience suggests that some of the notebooks used within a corporate environment are employee-owned. By including potential employee purchases of notebooks as a factor in the expansion or refresh of corporate notebook fleets, the SMB PC acquisition outlook for 2015 gets altered.