IT security framework for SMBs

SMBs are not only increasingly dependent on IT – they are dependent on increasingly-interconnected systems, which are in turn open to an ever-expanding population of devices and access points. The volumes and value of data contained in these systems continues to grow, which both increases the potential damage associated with a breach, and attracts heightened attention from hackers. Techaisle’s SMB survey data finds a disconnect between security policy and security practice that creates the potential for poorly-coordinated approaches to security – an uncertainty that is magnified by shadow IT.

In Techaisle’s latest survey of SMBs, only 13% said that they were fully prepared and confident to handle security challenges, especially mobility security. The remaining 87% were partially prepared, unprepared or unsure. These are very sobering statistics.

Techaisle’s SMB Shadow IT survey data shows that over 70 percent of applications and nearly 60 percent of IT infrastructure related spend and decision authority lies outside of IT. These expenditures are made without the IT department’s approval, guidance, or in some cases, even without IT’s knowledge.

Security is becoming a more critical component of business rather than IT strategy.

SMB IT security managers should petition for senior executive support which will help to build an approach that safeguards the organizations, users and data, in a framework that is flexible enough to respond to emerging opportunities and threats.

The problem with mobility (like cloud) is that it changes the concept of “perimeter.” Intruders don’t need to batter through closely-guarded walls to gain access to the interior of the network; they can ride through a permeable configuration on the backs of mobile devices that have been granted access to the precious applications and data that live in the interior of the organization. It is as if the castle walls and drawbridge were replaced by windows and breezeways offering access to visitors arriving from all directions.

With mobility, the SMB user community becomes a ubiquitous and shifting source of portals through the perimeter. As a result, IT doesn’t need to only defend against recognized foes: it needs to protect the corporation from breaches that can result from the actions of its own workers, and needs to protect the same data that it delivers as an essential component of support for the mobile workforce – the workforce that is viewed by senior management as making compelling contributions to the top and bottom-line success of the business.

SMBs should consider a four-layer security framework model for deployment:

Techaisle forecasts that global SMB IT spend could very well reach US$597 billion in 2015 which is an average of US$700 per full-time employee and slightly over US$8K per SMB business. Corresponding US SMB IT spend will most likely be US$180 billion in 2015. Techaisle defines SMBs with 1-999 employees.

At worldwide level, 42% of SMB employees will be mobile by end 2015. US will have the highest percent of SMB mobile employees at 53% and Asia/Pacific excluding Japan will be at 45%.

Going back a year, the 2014 combined cloud and managed services spend by US SMBs was US$48 billion representing 27% of total US SMB IT spend. 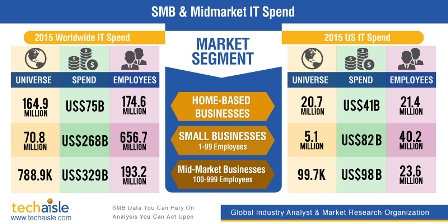 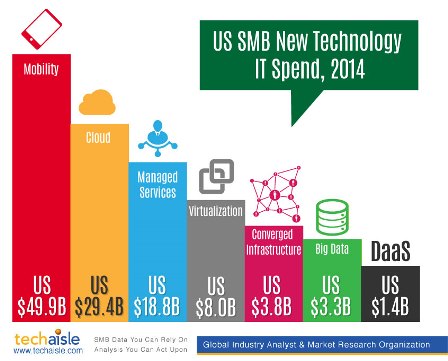 The global small and mid-market businesses, SMB (1-999 employee size) market has been the growth engine for the IT industry at large. The reason is quite simply that SMBs account for over 80 percent of businesses in any country – developed or developing. And over the last few years there has been an ongoing change in SMB IT priorities – Techaisle calls this as “Value Shift”. It signals the change in priorities from Enablement to Empowerment and refers to the new priorities among SMBs to invest in tools and technologies that allow their employees to make better business decisions, improve market reaction time and better serve their customers. In other words, SMB business executives are looking to improve return on Human Capital as a way forward.

No doubt the trend is towards increased spending on cloud and mobility but there are some other key spending trends to note: