An extensive survey of US small and midmarket businesses shows that HCI adoption is poised to double within the current planning period. Techaisle’s US SMB & midmarket survey on CI/HCI adoption shows that 18% of midmarket firms are currently using hyperconverged infrastructure (HCI – systems that package compute, storage, networking, hypervisors and other system software into a single product) but more compelling is the fact that another 46% are actively investigating and planning to adopt, a 2.5X increase in adoption – significant growth over the next 12-18 months.

Within the upper midmarket firms (500-999 employee segment), the current penetration is 45% and another 38% are planning to adopt. HCI has also caught the attention of small businesses (1-99 employees) with slightly less than 1/3rd of IT mature small businesses are planning to adopt. Dell EMC XC Express, HPE HC380 and Cisco HyperFlex Systems appear as top choices within the SMB segment.

SMBs view technologies supporting HCI adoption as contributors to business growth. Techaisle’s survey data shows that the drivers of adoption, anticipated or currently realized benefits and important purchase criteria are very tightly aligned around cost, agility, scalability, operational efficiency and high availability. The SMBs that are fully committed to digital transformation are on the fastest path to adoption, as HCI is an important element of a future-ready, resource-sensitive IT approach.

Converged infrastructure solutions (which provide a hardware-centric bundling of system components) are already in widespread use with twice as many SMB firms already using; and software-defined HCI delivers even more compelling advantages (relative to conventional/siloed server, storage, networking and management technologies) than SMB buyers obtain from converged infrastructure. Some of the important benefits that SMB & midmarket buyers realize with HCI include:

Techaisle forecasts worldwide SMB (1-999 employee segment) IT spend will reach US$735 billion in 2021 and cross US$1 trillion in 2028, growing at 2X the global GDP rate and 3X the enterprise segment. With slightly over 72 million SMBs (excluding home-based businesses), the market segment presents itself as lucrative and yet incredibly difficult to penetrate. Within each employee-size category there exists segments by IT sophistication, cloud maturity, digital transformation strategy, SaaS adoption, cloud first to cloud selective segments. As per Techaisle survey digital transformation is on the minds of most SMBs who are expected to spend US$275 billion on DX in 2018. And 42% of SMBs have become more dependent on technology over the last 12 months for better business outcomes. 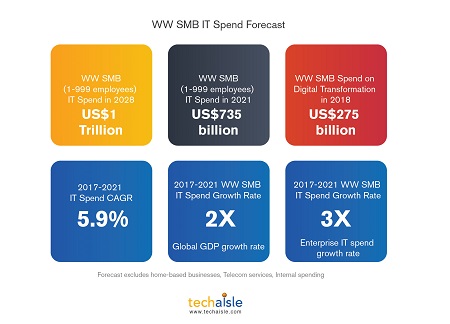