Techaisle SMB and Midmarket SaaS adoption data comparison from 2015 to 2019, illustrates that US SMB SaaS adoption went from widespread to practically ubiquitous. In 2015, less than 60% of microbusinesses and only 62% of all US small businesses were using SaaS, though the balance reported an intent to adopt software-as-a-service. In 2019, microbusiness use of SaaS has reached 77%, and overall small business SaaS use is up more than 29% to 80% of all US firms within the 1-99 employee segment. Looked at another way, growth from 62% to 80% means that within four years, over 47% of small businesses that weren’t already using at least one SaaS service adopted the technology.

Data gathered from Techaisle SMB and Midmarket SaaS adoption survey suggests that the immediate planned progression of SaaS portfolios will be measured in the US but not so in most other regions. European SMB SaaS adoption is still tepid at 49%, Asia/Pacific is not far behind Europe at 46%, and Latin America is still only 36%.

As is generally the case with cloud solutions, SMB buyers who have purchased or plan to acquire SaaS applications most often approach the ISV directly. While SPs/MSPs have traditionally been the most common alternative source of SaaS solutions, new SMB customers are increasingly turning to consultants – and to specialized cloud brokers – if they are not engaging directly with the ISV. The data indicates that these cloud service brokers are emerging as an important force in the SMB SaaS market.

Add-on services represent a large and essential source of revenue for SaaS suppliers; license spend represents less than 25% of total SMB customer spending, while non-license spend on services accounts for over 75% of the total. Support for analytics/dashboards and system integration are the two most widely adopted add-on services. Current SMB users are looking to invest in systems integration, sales process design, disaster recovery and deployment services, while new SaaS buyers are adding maintenance and operations, systems integration and analytics/dashboards to their new SaaS solutions. Some services are ‘stickier’ than others. Survey also found that SMBs often drop services after initial deployment is complete, but backup/DR, data cleaning, security, and analytics support are each retained by at least three-quarters of initial SMB SaaS buyers.

Let us drill down into services usage with the adoption of CRM.

Increasing profitability, improving workforce productivity and reducing operational costs are among the top five business issues for SMBs in the Asia/Pacific region. Cost is sometimes a tricky item to nail down as too often SMBs focus on short term costs. In most cases this approach is absolutely valid but it can lead to situations that cost them more. The choice between maintaining older PCs and replacing them with newer PCs is one such area. Techaisle, conducted a Pan-Asia survey of 2156 SMBs in five countries to understand the comparative differences in costs of maintaining older & newer PCs and associated quantifiable productivity lost and the impact of newer PCs. Findings from the survey, commissioned by Microsoft & Intel, and driving Microsoft’s “Make the Shift Campaign” in the Pan-Asian region, uncovers that the cost of upkeeping a PC older than four years can be used to purchase at least two new Modern PCs.

The study reveals that the cost of owning a 4 year or older PC by an SMB is US$2,736 which is 2.7 times the cost for a PC that is less than 4 years old. The study also revealed that an average of 112 hours is lost due to downtime of an older PC, a number that is 3.1X of newer PCs. This is a “stealth” cost that drains cash flow and adds to the operating cost of an SMB which they can hardly afford. Cost implications vary for SMBs of different sizes.

Techaisle’s detailed SaaS adoption survey tracked the current and planned buying journey of cloud CRM, ERP and other SaaS applications within SMBs and Midmarket firms. Cloud orchestration & digital automation have become essential ingredients for business transformation. Techaisle analyzed the extent to which use/intended use of each of these cloud applications is connected with other applications and whether they are part of a conscious effort for digital transformation. The two sets of figures below show past and planned CRM and its adjacent SaaS applications adoption journey.

The research reveals a very stark difference between the past cloud CRM adoption journey and the intended path after adopting cloud CRM for the first time. The past adoption patterns were seemingly random reacting to a specific point of pain, but planned adoption is deliberate keeping in view the business issues & IT challenges and taking giant steps towards a connected digital business.

In today’s competitive marketplace, it is critical that vendors develop detailed understanding of the small and midmarket segments, and align resources and strategies with requirements as SMBs move from initial experimentation with sophisticated solutions towards mass-market adoption.

In the US SMB & Midmarket IoT Adoption trends report, Techaisle Research analyzes 1,135 survey responses to provide the insight providers need to build and execute on IoT strategies for the small and midmarket customer segments. Techaisle’s deep understanding of SMB IT and business requirements enables vendors to understand the ‘why’ and ‘when’ of solution adoption, current and planned approaches to technology use, the expectations that drive user investments, and key issues in supporting buyers to better create and intercept demand. 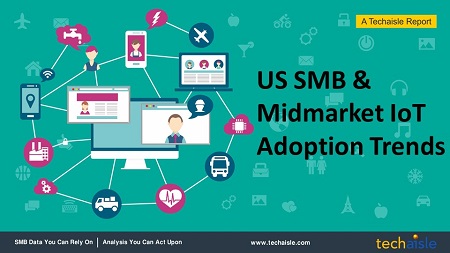 Highlights of findings presented in this report include: