However, it is also clear from data that the Holistic segment includes a disproportionate number of mature cloud adopters, and mature cloud adopters in turn are much more likely to be Holistic in their approach to digitalization than firms in the intermediate category. A smaller (7% of total) third group of midmarket businesses, ‘born in the cloud’ (i.e., have all IT resident in the cloud) largely echo the patterns of the mature cloud users.

From a digitalization product/service marketer’s perspective, this is an important finding: it shows that those who can identify mature cloud adopters are likely to find greater receptivity to their messages and offerings than those that engage equally with the similarly-populous group of intermediate (in terms of cloud adoption) midmarket businesses.

Firms in the Holistic segment are more likely than peers to have already adopted virtualization, managed services and IoT, and have more aggressive plans for embracing VDI/DaaS, Big Data and converged/hyper-converged infrastructure. Marketers targeting Holistic users are urged to explore alliances with leaders in these segments, and to look for opportunities to connect digitalization benefits messaging to attributes of potential partners’ product offerings.

Another way to approach the subject of potential alliances is to look at the technologies that align with midmarket digital transformation initiatives. Data shows, data analytics and cloud are the two categories that are most closely associated with digitization; providing these solutions (directly and/or via alliances) will be critical for suppliers looking to position themselves as digitalization solution leaders. Security and mobility/wireless are also ‘must have’ capabilities for organizations looking to address buyer needs. 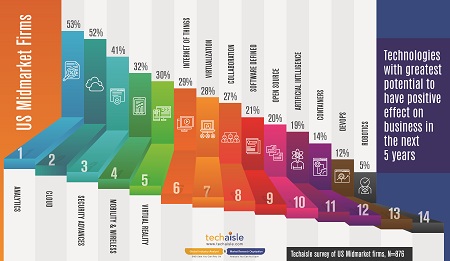 The next two technologies on this list, VR and IoT, are future options for most midmarket firms – and not necessarily ‘near future’. Still, their prominence on this list suggests that suppliers should be able to advertise the ability to integrate IoT and VR into digitalization roadmaps.

Virtualization and collaboration are IT building blocks that are already deployed, at least to some extent, in a majority of midmarket IT environments. Techaisle believes that their inclusion here indicates that suppliers will benefit from explaining how they can incorporate (or enhance) these technologies into/with digitalization frameworks. Software defined and open source represent realistic next-stage objectives for firms that are building the core skills needed to support enterprise digital transformation.

The final four items in the data, AI, containers, DevOps and robotics, are (with the possible exception of DevOps) future or ‘aspirational’ capabilities. In most contexts, simply observing that a provider can weave these into a digitalization strategy (rather than providing a detailed plan for adoption) is probably sufficient for midmarket digitalization messaging purposes.

What are holistic and siloed segments? 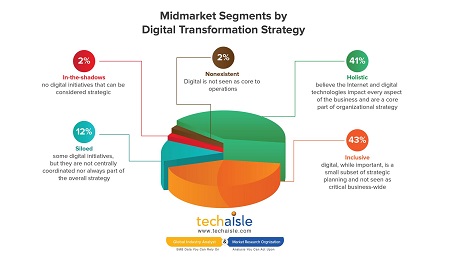