The increase in SaaS adoption will result in US$76B in global SMB SaaS spend in 2021. Despite the pandemic, due to more reasons than one can imagine, global survey data of 4700 SMBs shows that the year 2020 will see SaaS spend growth of 19% over 2019. Asia/Pacific and Western Europe regions will see the largest adoption and spend growth rates as compared to the US.

The increase in SaaS spend and adoption is fueled by acceleration in customer-focused, vertical/line-of-business applications, productivity and collaboration applications. By far, the biggest adoption jump is and will be in the vertical-focused apps - a reason why Microsoft in its latest Inspire event made a case for partners to increase their marketing and deployment initiatives for vertical/line-of-business SaaS applications.

Techaisle SMB and Midmarket SaaS adoption data comparison from 2015 to 2019, illustrates that US SMB SaaS adoption went from widespread to practically ubiquitous. In 2015, less than 60% of microbusinesses and only 62% of all US small businesses were using SaaS, though the balance reported an intent to adopt software-as-a-service. In 2019, microbusiness use of SaaS has reached 77%, and overall small business SaaS use is up more than 29% to 80% of all US firms within the 1-99 employee segment. Looked at another way, growth from 62% to 80% means that within four years, over 47% of small businesses that weren’t already using at least one SaaS service adopted the technology.

Data gathered from Techaisle SMB and Midmarket SaaS adoption survey suggests that the immediate planned progression of SaaS portfolios will be measured in the US but not so in most other regions. European SMB SaaS adoption is still tepid at 49%, Asia/Pacific is not far behind Europe at 46%, and Latin America is still only 36%.

As is generally the case with cloud solutions, SMB buyers who have purchased or plan to acquire SaaS applications most often approach the ISV directly. While SPs/MSPs have traditionally been the most common alternative source of SaaS solutions, new SMB customers are increasingly turning to consultants – and to specialized cloud brokers – if they are not engaging directly with the ISV. The data indicates that these cloud service brokers are emerging as an important force in the SMB SaaS market.

Add-on services represent a large and essential source of revenue for SaaS suppliers; license spend represents less than 25% of total SMB customer spending, while non-license spend on services accounts for over 75% of the total. Support for analytics/dashboards and system integration are the two most widely adopted add-on services. Current SMB users are looking to invest in systems integration, sales process design, disaster recovery and deployment services, while new SaaS buyers are adding maintenance and operations, systems integration and analytics/dashboards to their new SaaS solutions. Some services are ‘stickier’ than others. Survey also found that SMBs often drop services after initial deployment is complete, but backup/DR, data cleaning, security, and analytics support are each retained by at least three-quarters of initial SMB SaaS buyers.

Let us drill down into services usage with the adoption of CRM.

Techaisle’s US SMB and Midmarket SaaS adoption trend data shows that 73 percent of small businesses (1-99 employees) and 97 percent of midmarket firms (100-999 employees) are using one or more SaaS application categories. 37 percent of SMBs (1-999 employees) are using < 5 SaaS categories, however, 28 percent are using more than 10 SaaS categories (driven by midmarket firms). Overall 72 percent of SMBs are currently using 10 or less SaaS application categories but planned adoption indicates there is room to grow for the SaaS market within the SMB segment. The pace of SaaS automation is being governed by business & IT challenges, security posture, deployment and integration capability and point of purchase. Initial SaaS adoption has been for non-core business processes; however, 57 percent of mature adopters are using SaaS for core business processes. Techaisle survey data also shows that 64 percent of SMBs are using collaboration-focused SaaS solutions and 60 percent finance focused, however, future plans indicate that 62 percent will use customer-focused SaaS solutions.

As per Techaisle, US SMB and midmarket firms are forecast to spend US$25.6 billion on SaaS solutions in 2019. 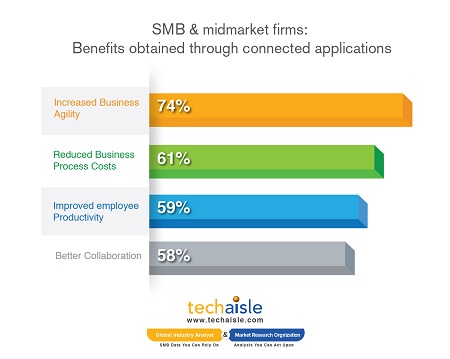