Techaisle’s recently completely study 2015 US SMB Cloud Computing Adoption Trends shows that Cloud adoption within US SMB is currently 89 percent and will reach 96 percent in 2015. Cloud is no longer a trend that is discrete from mainstream IT. Cloud is not a future issue – it is an essential (if new) component of SMB IT. Cloud addresses real business needs. The key to accelerating growth within SMBs will be increased Cloud vendor sophistication. Techaisle expects Cloud suppliers will work with SMB buyers to overcome current SMB cloud challenges and will focus on “growing the pie” rather than share-shifting as the market itself becomes firmly entrenched in the early-mass-market stage of the market lifecycle.

In 2015, one can put an end to this kind of discourse. SMB Cloud is no longer a trend that is discrete from mainstream IT. Data presented in Techaisle’s report shows that Cloud Computing will reach 96% adoption by US SMBs in 2015. Publications looking for future trends will need to turn their gaze to converged infrastructure, or Big Data, or the Internet of Things. Cloud is not a future issue – it is an essential (if new) component of SMB IT. 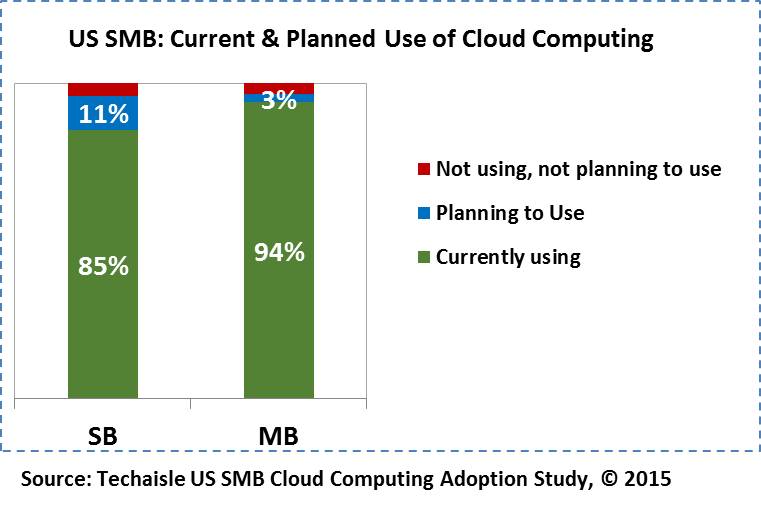 This shift in Cloud’s positioning brings with it a shift in the kinds of insights needed to help connect suppliers and buyers to address common interests in deployment, integration and expansion strategies. SMBs need help in moving past initial cloud pilots and applications to integrated cloud systems that provide support for mission-critical processes. Cloud sellers need to adjust their messaging to address the needs of early mass market rather than early adopter customers.

From an IT perspective, it’s important to understand just how widespread cloud has become within SMBs – and what the next steps in cloud are likely to be. The first part of this is straightforward: cloud is on the minds of nearly all SMBs, and is currently used, to one extent or another, in 89% of US SMBs. 2015 SMB IT priorities data shows cloud’s ubiquity - the extent to which cloud and other important IT infrastructure/solution types factor into 2015 SMB IT plans. Cloud tops the list.

Techaisle survey data finds that small businesses move from point to point, working first on one discrete solution, and then on the next. On the other hand, midmarket businesses have already deployed point solutions, and are now trying to build a longer-term strategy for an integrated, flexible approach to incremental cloud expansion. This dichotomous approach is a real challenge for Cloud suppliers: they need to differentiate discrete solutions for the small business market, and demonstrate that their offerings are essential components of broader strategies for midmarket firms, while attracting attention to their companies and products and building brand preference in both segments.

More posts from author
Monday, 28 November 2022 Combination of Dell APEX and Multi-cloud by Design is a winning combination
Tuesday, 15 November 2022 Zoho – A Great Bet for Mid-Market firms
Wednesday, 12 October 2022 Lenovo ThinkBook Plus Gen 3 is a phenomenal multitasking notebook for the discerning SMB user