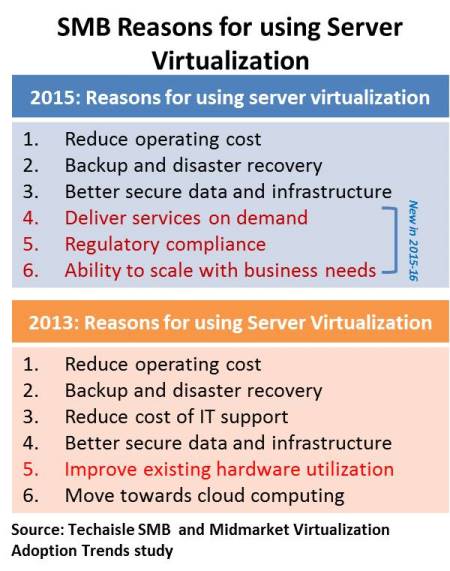 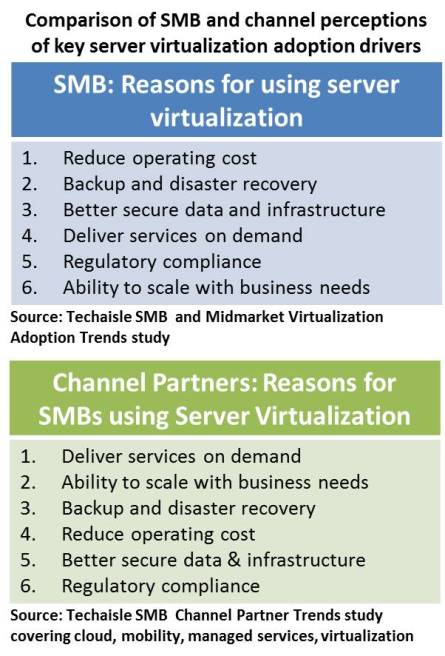 SMB Converged infrastructure: Poised for growth at the expense of traditional servers?

Additional survey data illustrates that suppliers of converged infrastructure should be proactive in making potential customers aware of the benefits of their technologies. While roughly half of both small and midmarket businesses describe themselves as being in the information gathering stage, one-third are currently identifying potential solutions, and 15%-20% are evaluating suppliers. It seems unlikely that buyers will ‘mix and match’ converged infrastructure technology, so it is important for suppliers to win initial orders – and the data shows that many of these purchase decisions are already underway.

Question is “what sales channels are best positioned to intercept this demand?” Data shows that converged infrastructure routes to market will likely follow the pathways used to acquire software management layer that controls these physical resources. Both small and midmarket businesses are most likely to turn to hypervisor and networking vendors. Systems integrators have a substantial presence in the supply of these solutions whereas as VARs and managed service providers (MSPs) have more limited presence/appeal as virtualization solution sources.

In many ways, the key market issue surrounding converged infrastructure isn’t vendor-vs.-vendor competition, but rather, the ability of converged infrastructure as a system class to gain share quickly vs. traditional server products, while not being obviated by the cloud before attaining mass market penetration. However, suppliers are competing for share in this growth category, and understanding SMB what buyers are looking for – and what they struggle with when they adopt converged infrastructure – is important to positioning a brand as a credible solution.

Figure below uses data from multiple surveys to illustrate trends in virtualization penetration within SMB accounts that have adopted server virtualization. In 2013 the proportions of servers virtualized was very similar across all employee size categories, ranging from 61%-62% in microbusinesses (which sometimes only have one server, making virtualization an all-or-nothing proposition) to just over 50% in midmarket enterprises with 500-999 employees, which can be expected to have many servers. The statistics for 2014 show virtualization penetration rising in all employee-size segments: rapidly in microbusinesses and the 500-999 midmarket enterprises, and gradually in other SMB segments. The perspective on future intentions, drawn from the Techaisle SMB 2015 survey, indicates that these trends will continue and accelerate. Microbusinesses and larger SMBs (including both the 250-499 and the 500-999 segments) are expecting rapid further penetration of virtualized servers, and the other midmarket segments are expecting a further 6%-10% of servers to be virtualized.

What does this trend mean to the market?

Clearly, there is increasing opportunity for hypervisor sales, and Techaisle would expect that VMware will find purchase within companies looking to connect virtualized servers to other infrastructure assets (especially, for example, hybrid cloud or software-defined networking or storage), while alternative suppliers, such as Microsoft, gain share in the core market as multi-hypervisor strategies become more common. Techaisle expects that this trend also indicates increased opportunity for converged infrastructure products as these systems can be used to capitalize on advanced virtualization capabilities.

A comparison of 2013 and 2015 research results shows that within each employee size segment, SMB end-user organizations are becoming more likely to virtualize servers that are located outside of their business premises. Across the entire SMB community, there has been a 45% increase in off-premise virtualized servers in the past two years: an enormous shift that highlights the broader shift towards remote management of infrastructure resource. 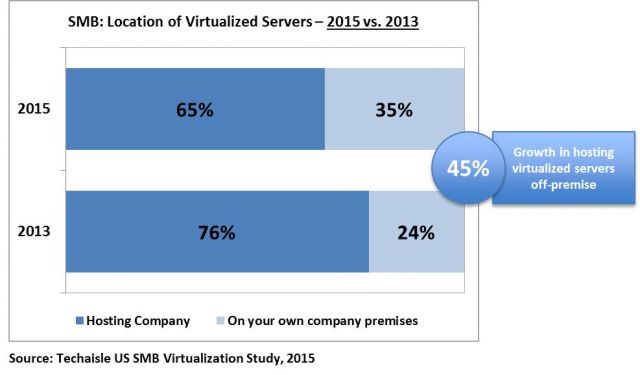 If virtualizing servers is so popular – why isn’t it universal?

The Techaisle interview of 848 US SMB ITDMs uncovered a number of reasons why SMBs struggle with virtualization adoption. The top five challenges cited in the research illustrate the complexity that can accompany infrastructure changes.

The most prominent challenge, cited by 34% of SMB respondents, was the high cost of virtualization licenses, which may explain why the expansion of virtualization within current user accounts often includes investigation of (and in many cases, migration to) a multi-hypervisor strategy that adds “free” options such as Hyper-V and Xen. 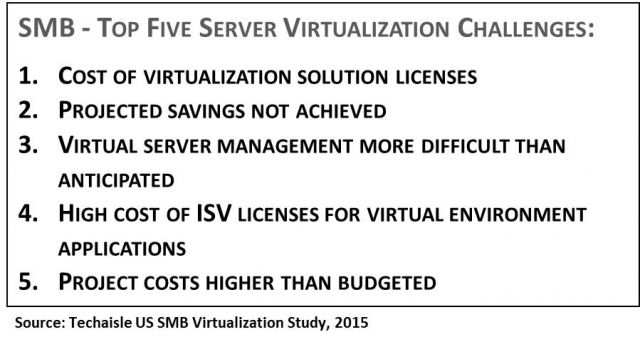 The third most common challenge is that management of virtual servers proved to be more difficult than anticipated, which may reflect initial learning curve struggles and/or incremental complexities associated with environments relying on multiple hypervisors.

The second leading challenge, “projected cost/space/power savings not achieved,” highlights both the cost and complexity issues: it can be difficult to obtain projected densities/utilization rates during the adoption/migration period, and expenses can escalate in several ways: due to costs associated with virtualization solution licenses, and also because of the “high cost of ISV licenses for applications running in a virtualized environment” and generally higher-than-anticipated project costs. It is worth noting as well that in small businesses (1-99 employees), “lack of experience” is also seen as a major server virtualization challenge, cited by 22% of survey respondents.

On the positive side, the relatively high level of server virtualization experience found within the SMB channel partners (Techaisle SMB Channel Trends study) may help mitigate this issue – but it should act as a caution when evaluating market outlooks for VDI and DaaS, where experience levels within both the SMB buyer and SMB channel communities are much lower.

What is driving global SMB VDI and DaaS adoption?

Results from the Techaisle SMB 2015 Virtualization surveys in the US, EMEA, Asia/Pacific and Latin America indicates that client virtualization has not been as widely adopted by SMBs as server virtualization. VDI is quite a lot less common than server virtualization, and DaaS adoption is still in its early stages. Techaisle believes that most midmarket firms that have invested in VDI and especially DaaS are still experimenting with the technology, and that most small businesses are still several years away from even this level of preliminary adoption.

Techaisle is able to draw on its multiple large-scale global SMB surveys to illustrate changes in SMB VDI/DaaS adoption drivers, and is able to add context from its SMB channel research to illustrate similarities and differences in perspective between SMB buyers and their primary IT advisor/supplier community.

Comparing 2015 and 2013 reasons for using VDI/DaaS
The key theme in the 2015 responses is “control”: SMBs are looking for more effective backup and disaster recovery, for more security, for means of assuring regulatory compliance, and for a platform that supports scalability and flexibility. With the exception of “reduce operating cost,” 2015 respondents are not particularly focused on cost issues, or on support for mobile apps.

The 2013 findings reflected a different set of SMB user needs. Two years ago, apps were paramount, with providing “access to applications from anywhere on any device”, “improving the availability of applications” and “deliver services on demand” the first, second and fourth highest-ranked responses. In 2015 these factors rank seventh, ninth and tenth on the list.

It seems clear that while an earlier generation of SMB VDI/DaaS adopters was looking for a means of delivering apps to users, today’s SMBs are looking to VDI/DaaS as a means of increasing control over mobile assets. This may be in part a reaction to generally-greater access to capable mobile apps, but it may – and in Techaisle’s opinion, does – reflect much greater awareness and concern over corporate data security concerns arising from widespread use of mobility.

SMB and Channel Disconnects
If we compare 2015 SMB buy-side and SMB channel responses, we see that the channel has not moved from “app” to “control” as fully as the SMB user community. SMB buyers prize control options – backup and DR, security, and compliance – and also acknowledge the importance of OPEX reductions and scalability. The channel believes that SMB clients primarily value scalability and flexibility, and also understand the need for control over regulatory and backup/DR, but are still focused on app delivery issues – “deliver services on demand” and “anywhere/any device app access” – that have fallen in the buy-side priority queue.

Targeting by IT Sophistication Segmentation
Techaisle’s IT sophistication-based segmentation finds that there are pockets within the global SMB market that are progressing faster than their employee size group peers. Advanced IT small businesses are five times as likely to be using VDI today as Pre-IT organizations. While DaaS is less well established, roughly a third of the small business Advanced IT group is using or planning to begin use of DaaS as well.

Within midmarket businesses VDI penetration does not vary much by sophistication segment, indicating that it has reached a relatively common level of use. DaaS, on the other hand, is still wending its way through midmarket users: 10% of Basic IT firms, 20% of Advanced IT firms and 31% of Enterprise IT firms have at least initial trials underway. DaaS messaging should therefore be targeted primarily at the more sophisticated SMB user communities.