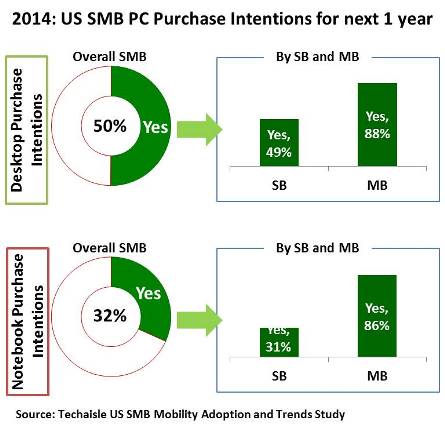 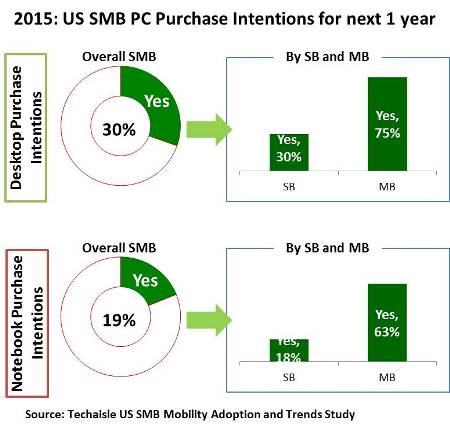 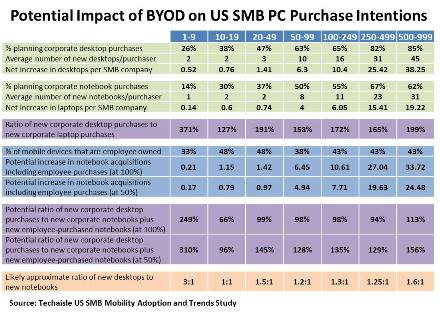 As is the case in each year’s research, the 2015 Techaisle SMB Mobility Adoption Trends survey asked respondents to detail their plans for acquisition of different types of client devices. Two of the major categories investigated by the survey were desktop PCs and notebook PCs. Here, as was the case last year, Techaisle finds stronger purchase intentions for desktops than for notebooks: 30% of US small businesses and 75% of US midmarket companies are planning to buy desktops in 2015, as compared with 18% of small businesses and 63% of midmarket firms reporting notebook purchase intentions. Projected volumes of purchases are also generally higher for desktops than for notebooks.

However, corporate purchase intentions do not provide a complete perspective on mobile device acquisitions. While one can assume that all desktops connected within a business are company-owned, both data and experience suggests that some of the notebooks used within a corporate environment are employee-owned. By including potential employee purchases of notebooks as a factor in the expansion or refresh of corporate notebook fleets, the SMB PC acquisition outlook for 2015 gets altered.

Yes - Netbooks are all the rage right now but we at techaisle don't believe in the doom and gloom scenarios pointing to the demise of notebooks. This is akin to a donut shop that starts selling bagels. Yes there will be people that come in and but a bagel instead thereby cutting into donut sales or maybe the better analogy is of a shop that sells donuts and mini-donuts. Same product shrunken in size.

But is the netbook now the new notebook? Should PC makers be concerned about cannibalization? Conventional thinking might suggest that to be true. After all, digital music cannibalized (and pretty much destroyed) CD sales, DVDs cannibalized VHS tapes and the list goes on. In all those cases however the new technology delivered a different and unique experience that older technology could not deliver - ability to create your mixes in the case of digital music, buy one song at a time and better viewing experience with DVDs. Cannibalization = replacement but for that replacement to happen, the product has to offer something unique. This is clearly lacking among netbooks whose only claim to fame is being a cheap, lightweight and small device.

So why are netbook sales increasing. We believe two things are happening:

4. Expansion of laptop/notebooks -  better hardware, greater price ranges observed for notebooks. Consumer, SB notebook market emerges. Mobility remains the primary driver but better price performance drives cannibalization of desktops. However, not all desktops will be replaced (at least over any reasonable forecast period). desktop replacement by notebooks will hit a wall at a point where the desktop value proposition exceeds that provided by notebooks

So while netbooks have been able to expand the market today by attracting new buyers and addressing latent mobility needs (need for small, lightweight device), market expansion will be limited by what we call the "value proposition differential" - the subjective and objective differences in user experience between products. This is a concept that Apple understands very well as evidenced by the success of iPods and iPhones

In other words, while pricing and weight got the market started, it will not be enough to sustain the growth of netbooks.
Tags:
Emerging Markets Netbook Notebook PCs
Tweet
0 Comments
Previous     Next
1 2 3