Techaisle survey shows that a strong link between analytics, Big Data and IoT. The connection between IoT solutions supporting process analysis and analytics and Big Data is not lost on the SMBs included in the Techaisle SMB and midmarket IoT Adoption survey. Findings from the research reveal that there are strong links between analytics/Big Data use and intentions and IoT use and intentions and sophisticated SMB use explicitly ties these two together.

Consider the data presented in the figure below. The top left quadrant of the tables shows the proportion of current analytics and Big Data users who have also deployed IoT; at 37% and 47% respectively. There is evidence that current users of analytics and Big Data are the lead adopters of IoT, a finding that is further supported by the fact that 53% of current analytics users and 45% of Big Data users are planning to use IoT in the near term, which will bring the proportion of analytics/Big Data users who are also deploying IoT to about 90%. 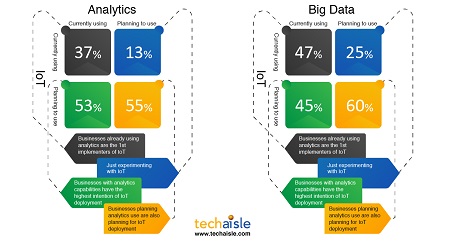 It may be noted that some IoT solutions – such as occupancy sensors in buildings, which never have to do anything but go on and off – don’t need to be tied to advanced process analytics to contribute positively to adopters’ success. In these cases, there is little need for analytics and Big Data integration. However, use of this data to support other decisions (e.g., determining optimal times for cleaning, establishing security routines or advertising schedules, resupply route optimization) would entail use of analytics and potentially Big Data as well.

However, Techaisle believes that it is at least possible that a more sophisticated SMB user segment explicitly ties these capabilities together, gaining experience with analytics/Big Data and then deploying IoT systems that will feed into analytical capabilities. Firms that report current use of IoT but not of analytics/Big Data are just experimenting with IoT, and are not yet ready to deploy IoT in support of process analysis and in pursuit of competitive advantage.