Techaisle’s US SMB & midmarket IoT adoption trends data survey shows that use of IoT today may be low within small businesses generally, and particularly within microbusinesses, it is more widespread within midmarket firms, with roughly 30% reporting that they are currently using IoT. As is often the case with emerging technologies, production-grade usage levels are not yet quite as high as the data would appear to suggest. Detailed perspective on SMB use of IoT is gained by examining the nature of current deployments and the survey finds that there is a five-level IoT progression.

As the figure below shows, just over half of SMBs who are using IoT today are at one of the two bottom levels: they either have a limited number of sensors feeding isolated systems, or are using IoT devices to enable remote monitoring/service/control. SMBs who reported that they are using IoT to “provide basic information” or are in an “ad hoc pilot” are included in these first two levels. 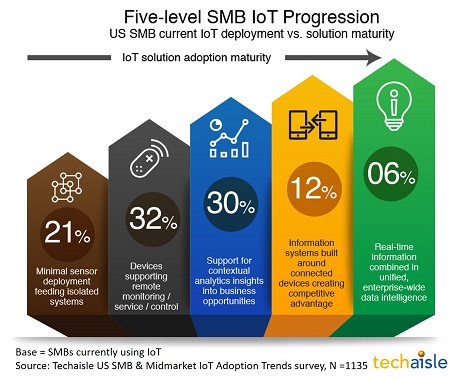 Another 30% of IoT users are applying contextual analytics and tight integration of analytics and sensor data within business activities is the foundation of sophisticated IoT use; as a result, this is the step at which advanced IoT begins.

18% of SMBs report that they are in one of the two most advanced IoT modes. However, some of these SMBs may be overstating the actual capabilities of their current systems. These categories, though, will become much more prominent over time: new users will begin with the ad hoc approaches shown in the first two steps in the progression, and then will add process integration to reap greater insight and competitive advantage as they gain experience needed to deploy and benefit from more sophisticated IoT solutions.

What is most compelling though, is the high level of IoT usage intent. Almost one-quarter of small businesses and more than half of midmarket firms report that they are planning to deploy IoT solutions. As with the current use data, these figures probably incorporate both firms with clear, near-term plans and those with a more exploratory approach to IoT. The specifics of the divide between these two groups are less important than the directional finding: that while IoT use is limited today, interest is extremely high, and SMBs are moving beyond general interest to developing real plans for incorporating IoT solutions into their business operations.