In 2013, during my presentation at an Intel offsite in Chandler, Arizona, one of the topics of discussion was 2-in-1, demand for which was tepid. Techaisle research had shown that PC OEMs marketers had done a good job of building initial awareness for the devices. With the notable exception of micro and very small businesses, awareness of 2-in-1s was relatively high. What was not high, was consideration and purchase preference for these devices. For two hours I presented arguments, supported by research and analysis as to why the 2-in-1 market demand was forecast to low for several years.

The initial 2-in-1 market was an attempt to fill a ‘middle ground’ that had been created by the trend towards multi-screen endpoint strategies. Techaisle’s research showed a usage continuum of endpoints. On one side, there were desktop devices capable of creating content. At the other end of the spectrum, there were smartphones that lacked the tools needed for content creation, but provided a lightweight, mobile option for content consumption. On this continuum, tablets were also primarily consumption devices, but could be used for light content creation, while laptops were capable of creating content, and could be used as a mobile consumption port. 2-in-1 devices were targeting the space between tablets and laptops. They were attempting to provide better creation options than were found with tablets, while offering a form factor better suited to consumption than was found with traditional laptops.

Too many & confusing design options provided choice but caused purchase inertia. The moving parts needed to enable a 2-in-1 were also viewed as a drawback/potential point of failure for these products There were Detachables, Dual screens, Flip/Fold, Floating Slider, Swivel/Twist, Track Slider and the Ferris-Wheel. I had tried many of them. I even experimented with the original incarnation of Dell 2-in-1, the XPS Ferris-Wheel. None of them were convincing enough to discard my trusted clamshell laptop in favor of a 2-in-1. Techaisle survey respondents cited four key drawbacks to the 2-in-1 designs: 1/ Too many moving parts, 2/ Limited battery life, 3/ Fragile designs, and 4/ Lack of storage capacity. I could easily have been one of the respondents in Techaisle’s survey.

Techaisle's recent survey of resellers and retailers in emerging market countries shows that most resellers are optmistic about demand for 2-in-1 laptops.

About two months ago Dell sent me their latest XPS 13 2-in-1 configured with Intel’s 7th gen Core processor, Intel HD Graphics, 13.3'' FHD (1920 x 1080) InfinityEdge touch display and keyboard with fingerprint reader. I put it to my road test. And have since become a convert. I can say that likeability and excitement of a 2-in-1 device can now safely translate to purchase with design elements and price having converged into a unifying experience for the end-user. 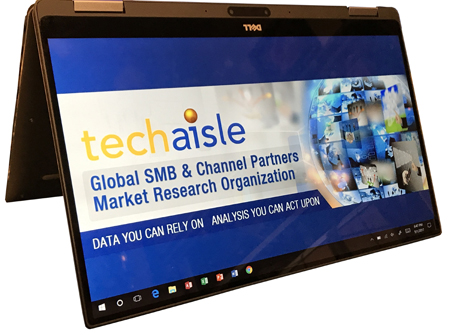 I have been traveling with both the clamshell XPS 13 and 2-in-1 XPS 13 for most part of last two months and have been using the two laptops interchangeably. The latest XPS 13 2-in-1 design is no longer confusing. It is as simple as open and shut, in fact, open it to a full 360 degrees and use as a tablet. Three differences stand out that are impressive about the 2-in-1.

First is the noticeable silence because of its fanless design (there are no cooling fans) unlike the traditional XPS 13 where the fan roars up, almost always at inopportune times. This design is made possible because of Intel’s Kaby Lake Y-Series CPU which also allowed Dell to design a 360-degree hinge and make the 2-in-1 thinner than the traditional XPS 13 laptop. I did not notice any performance degradation with the Y-series CPU as compared to the more common U-series CPU. But then I do not use CPU-intensive applications that would push the performance boundaries of a laptop. Techaisle research indicates that most SMB & midmarket users don’t. On the contrary, I found that Power BI queries and SPSS  accessing years of SMB global survey data, historical PC retail sales out data and training data were running a little faster. Perhaps due to the dynamic power mode (a turbo charger) that automatically triggers power bursts while keeping the unit cool.

Second is the solid and smooth operating hinge design which vanquished my tentativeness and trepidation of potentially snapping off the screen (as was experienced in some earlier versions of 2-in-1s). One of the four key drawbacks as mentioned earlier) has been taken out of the equation. In fact, I realized that I was unconsciously reaching for my 2-in-1 in the tent mode for all my webcasts, on-site presentations and video conferencing. I found it to be more convenient and versatile which contributed to my improved productivity, quality of presentations and discussions. I could easily perch the 2-in-1, upside down, on my office desk or a desk in a hotel room and work away. The camera automatically inverts which makes it most convenient to use instead of the camera placement as a traditional laptop. This is important because during video collaboration the 2-in-1 camera focuses on the face.

However, I did find it very tough to open the lid/cover of the laptop. There is no lip to get a grip on the lid. But the tent mode, which is very sturdy, made me replace my iPad for Netflix movies. And a better sound provided a more immersive experience. I used it during my latest long-distance flight without having to hold my iPad or hang it from the seat in the front. My Bose headphones worked extremely well.

Third is the battery life which addresses the third drawback cited by SMB firms. Foolish me, but I did travel, both domestic & international, with both laptop types. They both responded well to my ceaseless use. I traveled with only one power adapter and most of the times I had the 2-in-1 unplugged.

When I first received the XPS 13 2-in-1 I showed it to my son. We were in New York in a hotel suite. Completely engrossed and never looking up from his blindfold Rubik Cube practice session he questioned as to why would one use a 2-in-1. A few days later as we were traveling together for his national championships and then internationally for his world championships I gave it to him to use for a few hours to practice his scrambles, algorithms and timings. He changed his thinking. He said, dude this is really cool. He used it a lot without having to frequently charge. For those interested, he did break the world record in blindfold Rubik Cube. Since then I have the XPS 13 2-in-1 back in my possession.

And then there is Windows Hello. The Dell XPS 13 2-in-1 has both an IR camera and fingerprint reader. The IR Camera works great in normal laptop mode, with occasional slow recognition and log-in. But then usually I am not in a hurry and I can wait an extra milliseconds. However, it fails to recognize me in the 2-in-1 tent mode. The fingerprint reader is perfect.

A lot is made about very high resolution, typically, 3200 x 1800, which is on my clamshell XPS 13. I am perfectly fine with 1920 x 1080 resolution on the 2-in-1. There are two main reasons: 1/ it works well with commonly used applications that have not upgraded to high resolution displays, 2/ it works flawlessly with my external monitors which are 1920 x 1080 displays.

The category name “2-in-1” indicates that the form factor is trying to draw buyers into the market by promoting capabilities that span multiple categories – a combination of attributes found in notebooks and in tablets. Beyond the straightforward ability to displace separate PC and tablet acquisitions with a single device, the ability to combine the key interface options of touchscreen and keyboard is the primary 2-in-1 attraction. Buyers, especially within midmarket (100-999 employees), appreciate the availability of touch and keyboard. Specifically, Techaisle survey shows that BDMs, have a distinct preference for two 2-in-1 attributes: relative to ITDMs, they are much more in favor of replacing two devices with one (presumably, to reduce the number of devices that they are carrying). However, I will continue to be a three-device user. There are certain inherent advantages of an iPad which are not there in a 2-in-1, even the one as light and thin as Dell XPS 13 2-in-1. Additionally, there are many frequently used apps which are not available in Windows store.

If anyone is in the market for a laptop, Dell XPS 13 2-in-1 should be the choice. It is built upon the core strengths of XPS 13, has addressed all design drawbacks and is poised to make a serious run at the endpoint market.

The only thing personally holding me back from using it 24 x 7 as compared to the clamshell Dell XPS 13 is the storage capacity. Being in the market research & analyst industry I am a data hoarder. At Techaisle we use cloud for everything but I am also the paranoid employee. I have already reached the 500 GB limit of XPS 13 and in the dangerous territory of crossing it in the next 1-2 months. Although, XPS 13 2-in-1 is available with 1 TB of SSD, the unit that I have supports only 256 GB.

SMBs should also give a consideration to Dell’s Latitude 7285 2-in-1. It is a serious detachable, wireless charging 2-in-1 for business users. And there are also the latest Dell Inspiron 2-in-1s announced as of 28th August 2017.

Tweet
Tags:
Intel XPS13 2-in-1 Dell SMB
Techaisle study reveals four pillars of midmarket ...
SMB market is not a monolith – 32 percent are in A...