In 1818, John Keats, the famous romantic lyric poet wrote “a thing of beauty is a joy forever”. Two centuries later I opened the Dell XPS 13 9300 packaging to behold the beauty of a PC notebook. I let the XPS 13 sit on my desk for three days, lest I may spoil the serenity of the frost white / alpine white composite fiber chassis. But use it and review I must.

As an SMB analyst, I decided to evaluate the notebook through two lenses – the SMB and home user. Consumers & SMB employees already overlap in their use of technology usage between work, home, anywhere. Dell XPS 13 is a right-fit for both. The latest model that I am using is Intel 10th Generation i7 (Comet Lake six-core processor), 1TB SSD, 16GB RAM and FHD+ display.

The difference between the new Dell XPS 13 9300 and the older version XPS 13, which I am used to, is like chalk and cheese. Besides look and feel, power and productivity seem to be the core design tenets of the newest model. Productivity enhancement begins with the four-sided InfinityEdge 13.4" FHD+ Touch anti-reflective 500-Nit display. The original 16:9 screen has been replaced with 16:10 which as per Dell has 91.5% screen-to-body ratio. As a result, the 19.5mm bezel at the bottom of the display which used to house the webcam has been reduced to 4.6mm giving the entire screen an edge-to-edge display. PowerPoint and Excel or Excel and Word or PowerPoint and Word are three of the applications that I use side-by-side most often. With the new aspect ratio, I feel that I am successfully tricked into achieving better productivity because of more screen real estate. Working from home, my XPS 13 notebook is usually connected to Dell UltraSharp 27-inch monitors via a Dell dock but I remain productive even during my occasional trips to other rooms of my home (in the absence of travel). When I have to look at data all day long, full screen brightness works great for me – both indoors and outdoors.

In addition to a taller display, the edge-to-edge keyboard with larger keycaps and touchpad add to a productive experience. The left and right arrow keys are full-size, bigger than in previous models but the up and down arrow keys are still annoyingly narrow and tiny. The page up and page down keys are gone but I do not miss them. Normal travel of the keys makes for comfortable typing for both one-finger and ten-finger typists. The keyboard backlight is nice but the color against composite alpine keyboard deck threw me off initially because the contrast is unnoticeable. There is a slightly higher light bleed under the “U” key than other keys which leads me to believe that all keys may not be seated uniformly. But I am just nitpicking. It does not in any way hinder the performance, likeability and experience of the notebook. After many days of use I have managed to reprogram my muscle memory to look for delete key one space to the left because its rightful place has been taken over by the power button / fingerprint reader (which is easy to reach, perfect size and not bothersome and incredulously placed on the side in the Dell Latitude 7390). The glass touchpad is not only smooth but is also big in a small-sized notebook. In the absence of left-right click buttons the physical switch works great for me which I prefer over a haptic sensor (present in some PC brands). The ample space for palm rest is one of the best experience design elements of the keyboard. 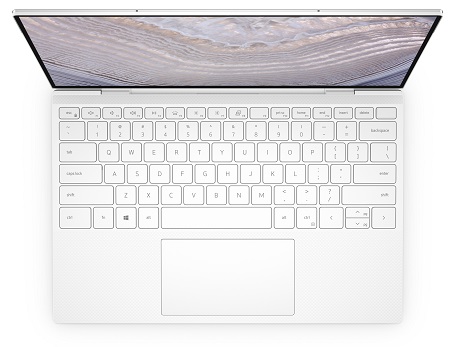 Outside of running benchmark tests, with zero travel, there is no easy process to test the battery life of XPS 13. Therefore, instead of running loops of video or test scripts, I used the notebook, only on battery, to attend both Red Hat Summit and IBM PartnerWorld / Think 2020 virtually. I did manage to get between 5 to 6 hours before finding it necessary to plug in the power cord. However, being “charging paranoid” I decided not to launch Dell Cinema Guide, to watch Rise of Skywalker on Disney+ without the notebook plugged in. The sound emanating from dual 2.5 watts speakers was crisp and immersive. So far, I have had very few occasions to use the far-field microphones and the webcam as I usually choose to use my video-call setup with external mic or headphone, camera and lights.

Dell Mobile Connect has come of age. Setup was simple and straightforward. I realized that during the initial setup had I enabled access to contacts, photos and syncing, it would have been beneficial instead of having to retrace my steps from ab initio. Photo transfer was easy, texting has been simple, mirroring has so far been unencumbered.

The fans for cooling usually fire-up at some inopportune times. I may be more sensitive to noise than most. To assess, I handed over the notebook to my son to use for a day. He had no complaints whatsoever. He told me that his Alienware is considerably louder and therefore he did not even notice any whirring sounds from the XPS13 even though I had asked him to listen carefully. Net, net – it is me fishing for flaws in a flawless machine. The chassis does heat up quickly though.

Two USB-C Thunderbolt 3 ports are plenty but I would have also appreciated a USB-A port. Disruption, even if short-lived, creates an unsettling feeling. I reconfigured my office desk to swap out some cables, replaced wireless with Bluetooth-enabled keyboard and mouse but lost the silent key / mouse click functionality. When normalcy is restored and peripherals’ backorders are cleared, I should be back to my obsession with silence.

Techaisle’s latest global SMB survey data reveals that 15% of SMBs find innovative design, look and feel as an attractive feature but 74% consider it among the top value propositions when purchasing a new PC. All features being equal, configuration / performance weigh slightly ahead of design during purchase consideration. Dell XPS 13 certainly ticks both the boxes equally well.

Dell XPS 13 beautifully straddles the business and home user. A great notebook for the corner offices, traveling sales personnel, frontline workers and discerning home users. Post review, I had an internal discussion to order a few Dell XPS 13s but the data collection center had recently equipped newly-minted remote workers so the PC budget was already tapped out. I did ask my son and daughter if they wanted to replace their older Dell XPS 13 models with the latest and greatest. They are still thinking.

To sum up, Dell XPS 13 is perfection personified.