For all the talk of a world predicated on software-defined resources, there is still need for capable, reliable, scalable physical infrastructure to support these software layers and the features and applications that sit atop them. The rise in virtualization has been driving an accompanying demand for converged infrastructure: products that combine processing, storage and networking into a robust and scalable unit that can support and respond to the options inherent in virtualization.

What is driving converged infrastructure adoption? 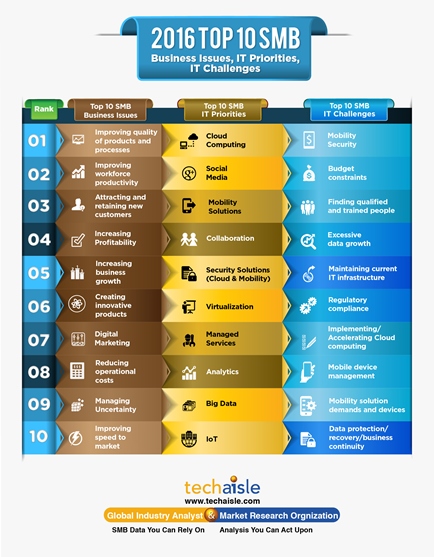 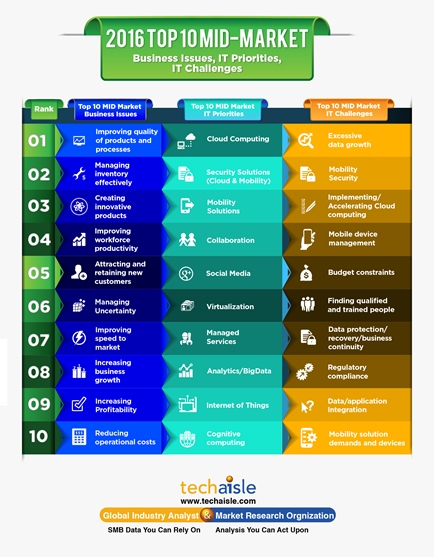 Managed services in the SMB channel

What is the current state of managed services in the channel?

Techaisle’s SMB global channel partner research shows that in the US 71% are currently offering one or more managed services solutions and another 18% are planning to offer managed services within one year. Techaisle believes that the channel is at the beginning of a migration from generalist to specialist firms that will play out over the next few years. With that in mind, it is fair to ask, how widespread is managed services delivery today?

Above data demonstrates that there has been and continues to be substantial take-up in managed services as a business delivery model outside of MSPs. This will help to build SMB customer awareness of the benefits of the approach and comfort with managed services as a delivery model. It will also have a positive impact on the channel generally, as experience with managed services helps build channel familiarity with recurring revenue models which will be important in other important channel business areas, such as cloud.

Comfort level with – and profitability of – managed services

Clearly, SMB channel members of many types are investing in developing managed services capabilities. This trend begs the question, to what extent are these firms benefitting from these investments?

VMware has been in the news recently – a valuable asset for Dell, caught between the Dell-EMC deal (see analysis of the deal here). Just a couple of months ago VMware had its VMworld, a forum for VMware to articulate its strategy to customers, partners, media and analysts. VMware’s 2015 theme “Ready for Any” was centered on the challenges that IT professionals are facing today - security, mobility, application delivery and hybrid cloud – and the company’s strategy of supporting “One Cloud, Any Application, Any Device” as a means of empowering IT management to respond to these challenges. VMware’s vision is to “enable an architecture that lets IT deploy or consume capacity from a cloud without having to worry about the physical location or who the vendor is. To do this VMware wants make sure that different form factors of the cloud (private, public, managed, etc.) connect or are transferable”.

Hybrid IT, including hybrid cloud, is no longer an appealing future proposition; it is a current reality as workloads increasingly run internally on a highly-optimized virtual environment connected to a public cloud, and public cloud resources are being widely used for developing and testing applications to be deployed on private or hybrid clouds. Many workloads process data in the public domain and simultaneously store sensitive data in the traditional data center to meet regulatory and compliance guidelines. Techaisle’s SMB & midmarket cloud adoption survey shows that within SMBs, use of hybrid cloud will continue to increase as both a conscious strategy and as a reaction to use of both public and private resources within a single infrastructure; hybrid use is expected to top 40% within the small business market, and will be used by two-thirds of companies with 100-999 employees.

Over the last two years, as virtualization penetration within enterprises has been slowing, VMware has been broadening its solution portfolio to deliver solutions for management and delivery of on/off-premise IT infrastructure. As a result, VMware’s product line has grown beyond compute: it rolled out vSAN for storage, NSX for network, and vRealize for management. Last year, VMware announced its vision of software-defined data center (SDDC) and introduced EVO:RAIL, which ties VMware software to partner hardware for a hyper-converged appliance. In the most recent VMworld this vision was extended to EVO:RACK: while EVO:RAIL was positioned as "SDDC in a box" suitable for midmarket businesses, EVO:RACK (now marketed as VMware EVO SDDC) is aimed at large enterprise customers. In Techaisle’s view, vSAN and EVO:RAIL are also relevant solutions for SMB customers looking to adopt hyper-converged infrastructure.

In 2014, VMware had announced integration between on-premise vSphere and VMware's own public cloud (vCloud Air) enabling businesses to migrate workloads to a VMware-based public cloud. In 2015, VMware extended the narrative to announce Unified Hybrid Cloud - built on SDDC and vSphere - to enable IT professionals run, build, deliver and secure any application, anytime and anywhere. Despite new offerings it is common knowledge that VMware still lags Amazon Web Services and Microsoft Azure in the public cloud market.

VMware is continuing its investment in network virtualization and in the future of NSX. It announced NSX 6.2 with added features such as inter vCenter NSX support, universal firewall rules and security groups, and Trace flow. Techaisle assumes a bigger game changer to be the integration between virtual and physical networks when VMware and partners such as HP complete the support of OVSDB in NSX to manage hardware virtual tunnel end-points (VTEPs).

While enterprise market may be saturated, virtualization adoption within SMBs is far from over. Techaisle’s SMB & midmarket Server Virtualization adoption market trends study shows that US SMB server virtualization penetration has reached 54 percent (un-weighted), up from 41 percent two years ago. Within midmarket businesses the penetration has reached 88 percent and another 7 percent are planning adoption in the next year. Across the entire SMB community, there has been a 45% increase in off-premise virtualized servers in the past two years, an enormous shift that highlights the broader shift towards remote management of infrastructure resource. VMware has positioned itself to capitalize on the immense SMB opportunity, however, it needs to have a sales motion that is specifically targeting net new customers within SMBs rather than “mining” the installed base as in enterprises.

The real story and opportunity for VMware, though, is in end-user computing.